source
In the United States, Flag Day is celebrated on June 14. It commemorates the adoption of the flag of the United States, which happened that day by resolution of the Second Continental Congress in 1777.In 1916, President Woodrow Wilson issued a proclamation that officially established June 14 as Flag Day; in August 1949, National Flag Day was established by an Act of Congress.Flag Day is not an official federal holiday, though on June 14, 1937, Pennsylvania became the first (and only) U.S. state to celebrate Flag Day as a state holiday. 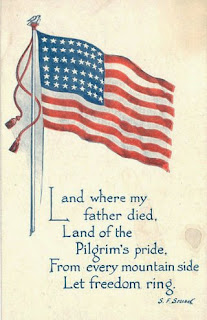 My Country 'Tis Of Thee 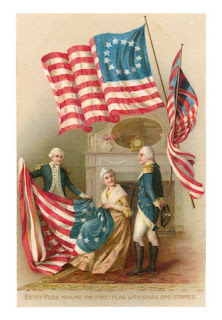 What if Betsy Ross had said,
"I'm just too busy to take on another sewing project."? 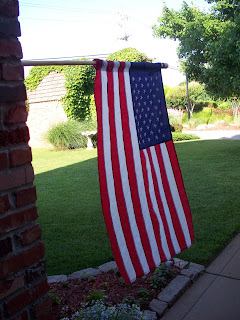 We proudly wave Old Glory at our front door.

I hope they are teaching this in our school's!

I put my flag out bright and early.

Our flag is flying proudly!

We had such wonderful lessons at school and rousing patriotic songs sung all on the front lawn (which was shaded) and around the flag pole. I wonder if they do that anymore...must ask the grands. It often was the final day of school for the summer, though these days that children have to tough it out for a few more days. At least, it hasn't been too hot for them this year. Thank you for the history lesson...I had forgotten a few things and didn't know that PA celebrates the day as a state holiday...nice.