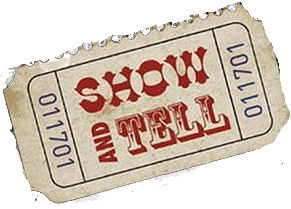 It has almost been a year since I've posted a
'Friday Show & Tell'.
I guess I got side tracked forgot that I used to do this as a frequent Friday post.
Without further ado here is today's 'show & tell'.

A few weeks ago I received a friend request on Facebook from one of my Daddy's cousins.
I don't remember Elmo.  Here is proof that I met him when I was a baby.
He posted this photo on my Facebook wall on February 18th.


He said this,
"Gerald and Helen taken at Tryon OK probably in winter of 1953-54 with one child probably Carol."
Yes, that's me all bundled up.  I had never seen this picture.  I love that it is in color. My parents look so young & happy.  Elmo took this picture with a slide camera.

I have thoroughly enjoyed getting to know Elmo.  I am so impressed that a 85 year old man is on Facebook.  He is sharing a series of stories about his life.  Here is the first story.
"We often hear about random acts of kindness. Well, I would like to post a series of acts of kindness where I was on the receiving end. The first occurred when I was in high school, wondering what my career would be since there was no work in my dying hometown. One day I went to the MKT Katy depot with Dad to get an express package. The dapper young depot agent impressed me so that I said to myself that is what I want to be: a depot agent. I never told anyone of my dream. A few weeks later I was called to the Supt's office. When I got there the Supt, Mr. Jones said Elmo this is the new Katy Depot agent and he is looking for a young man to train to be a depot agent and I thought that you would be an ideal match. He said he would arrange for me to be absent from school in the afternoons to train. I accepted without hesitation and that eventually led me to a railroad carrier, thanks to Mr. Jones."

Every day I'm anxious to see if he has shared another memory.
This is a message he posted on my wall this week.
"Carol. Regarding my stories. I have put together two books on Microsoft Publisher program. The first one covers my first 19 years of life including stories of the Murray family and my mother's family. The second one is the rest of the story. They were prepared for my descendants but I would like to send you a copy of the first one when I get some reprinted soon."

Looks like we all should be doing more writing, instead of cooking? :-)

Oh what a wonderful thing for him to have found you and you two to become good friends. I love his stories, amazing. Hugs, Marty

Oh there's nothing better than a family historian who writes it down. Writing it down is the important thing because memories are fragile and float off. My grandmother used to tell the most interesting tales, though she told them in so many different ways we didn't know anymore what was the truth. I'm so pleased for you and THAT is a great picture.

He is the original Elmo. He has a way with the written word. Love his story.

What an wonderful gift to have found him and his fantastic posts. What an amazing man! Love this so much. Thanks so much for sharing.
Karen

That is so cool! I love family stories. Thank you so much for sharing.

That sounds like a neat collection of stories. I wish someone in my family would write it all down from my dad and his siblings. There were 7 of them and they love to tell stories.