Remembering
a tragic day in the history of Oklahoma. . . 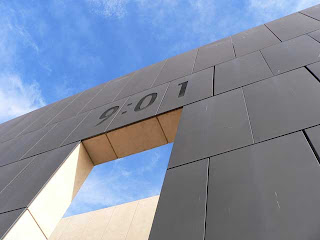 Lives were changed forever that day. 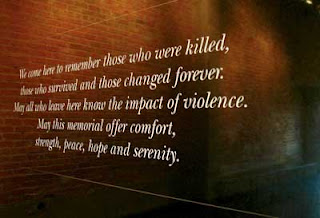 The Oklahoma City bombing occurred on April 19, 1995 when American militia sympathizer, Timothy McVeigh detonated a truck filled with explosives parked in front of the Alfred P. Murrah Federal Building in downtown Oklahoma City. McVeigh's co-conspirator, Terry Nichols, had assisted in the bomb preparation. It was the most destructive act of terrorism on American soil until the September 11, 2001, attacks, claiming 168 lives, including 19 children under the age of 6. More than 680 people were injured. The blast destroyed or damaged 324 buildings within a sixteen-block radius,destroyed or burned 86 cars, and shattered glass in 258 nearby buildings. The bomb was estimated to have caused at least $652 million worth of damage. 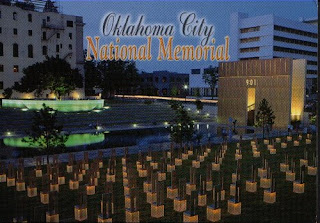 I remember where I was and what I was doing on this day 15 years ago. Our 4th graders where rehearsing for our annual presentation of the musical, Oklahoma. A co-worker who taught 4th with me was called to the office. She was told about the bombing by a family member.Her niece worked in the Murrah Building. Sadly, we were told several hours later that she died in the explosion.
Pray today for those who lost loved ones and the
survivors who are still coping with the horrible memories
and injuries from this senseless act.
Posted by Carol at 12:01 AM

I too was in the classroom teaching but we stopped immediately when the intercom come on and the whole high school watched in unbelief for the rest of the day. Unbelievable still today. Just unbelievable.

I was teaching in Putnam City and had my class lined up to go get on the bus for a field trip. We were going to the museum downtown. My classroom door slammed shut when the explosion occurred. I knew what it was..just didn't know where. Even though we didn't personally know anyone in the bombing, it was the saddest event I've ever experienced.

Such a tragic event! I remember this time, and feeling deep sorrow for the families and friends that were touched personally by this tragedy. We always have a prayer in our heart for those who's lives were forever changed.

I was standing outside of my supervisor's door. The explosion had just happened and my supv's sis had immediately called from OKC to say something was going on. In the office just next door, another co-worker had been talking to one of our OKC employees when the explosion occurred. The phone went dead because the phone lines had been knocked out. Our son's then fiancee (now his wife) was in OKC and he had a hard time reaching her. Although I didn't know it at the time, I had a cousin that was in route to downtown OKC for a meeting. She and the other passengers in the car were listening to the radio and heard the news. 15 years and it seems like only yesterday. Such a horrible tragedy. My prayers are with all of the families and friends of those who lost their lives, the survivors and the volunteers who worked in the aftermath.

I remember where I was to that day when I heard the news. I was sitting at my sister's kitchen table. My heart was so heavy and so sad.

I remember this day, as well. The kids were little and I watched all of the news coverage for days.

It was simply unbelievable that any American could hate their government so much that they could do something like this.

It is good to remember...to learn lessons from these devastating events. To remember those who did not come home that night. And those impacted for life.