About 15 years ago while I was thumbing through an old Highlights magazine I stumbled across a story about a snowflake scientist. After reading his story I knew it would become part of my lesson plans for January.

Here's a little information about this interesting man.

Wilson A. Bentley
The Snowflake Man

"Under the microscope, I found that snowflakes were miracles of beauty; and it seemed a shame that this beauty should not be seen and appreciated by others. Every crystal was a masterpiece of design and no one design was ever repeated., When a snowflake melted, that design was forever lost. Just that much beauty was gone, without leaving any record behind." Wilson "Snowflake" Bentley 1925
From the earliest memories of our childhood, many of us can remember hearing the phrase "no two snowflakes are alike". This discovery was made in the small rural town of Jericho, Vermont by Wilson A. Bentley (1865-1931).

A self educated farmer, Bentley attracted world attention with his pioneering work in the area of photomicrography, most notably his extensive work with snow crystals (commonly known as snowflakes). By adapting a microscope to a bellows camera, and years of trial and error, he became the first person to photograph a single snow crystal in 1885.
He would go on to capture more than 5000 snowflakes during his lifetime, not finding any two alike. His snow crystal photomicrographs were acquired by colleges and universities throughout the world and he published many articles for magazines and journals including, Scientific American and National Geographic.
In 1931 his book "Snow Crystals", containing more than 2400 snow crystal images, was published by McGraw-Hill but has long been out of print. A soft cover copy, identical in all respects, can be obtained today from Dover Publications, Inc.. On December 23, 1931, Bentley died at the family farmhouse in Jericho. Because of his wonderful work with snow crystals, he became affectionately known as "Snowflake" Bentley. 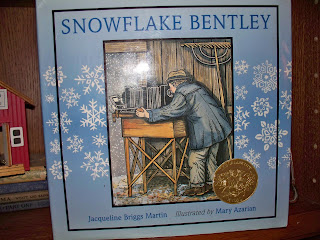 This is the children's book about Wilson Bentley that I used in my classroom. The story of Mr. Bentley's life teaches the virtues of patience and perseverance. I recommend it to everyone.
Posted by Carol at 12:01 AM

What a great story! I'll have to look for this book.

I grew up hearing that all my life, so to hear the history about that statement was great. Thanks for posting it.

I have never heard of him. How wonderful, I would love to read that book. Now you have me all curious and I am going to Google Images and look for pictures of snowflakes! You are a great teacher!

I love that book!! My students loved it too!

thank you for sharing that..I need to go find that book. My daughter will be hopefully teaching 2nd or 3rd graders this coming fall!

How cool... from looking at a distance the snowflake appears to look alike in it's all white beauty. Loved hearing the history of this story. Have a good day.
M

Now that was a cool post! How amazing our God is...5,000 snowflakes and no two alike!

We love that book, too.

One of the co-ops we are in is a literature based group. We did this book a few years ago.

This month we're doing tall tales. If you have any ideas to share, I'd love to hear them. Thanks!

I love the Anne Murray song that you have playing. I grew up listening to her, so when I pulled up your blog and heard her playing I immediately had good feelings and memories. Thanks!

Have a blessed day!

the voice of melody said...

It sounds like a wonderful story about a very interesting man. Thanks for sharing a little bit about him. :)

I love the snow so this post is dear to my heart! I will need to pick up that book - thank you so much for the history!

Thank you for posting this. I'll be looking for this book. It looks and sounds like a wonderful story. laurie

What can I say? ( I love snow flakes) Great Blog

Carol, thanks so much for stopping by! I might be here on your blog for awhile getting to know you. I like what you have to say. Thanks for sharing. Good luck on my contest! ~Mindy

This is so interesting. I have always heard that phrase, but didn't know who discovered this and said it. Thank you for sharing. Kathi

Hi Carol
I have never heard of that book but it certainly sounds delightful. I'll have to keep my eye out for it.
Rhondi xo

I read this book with my teenagers. We all still love a great children's picture book! You have such an interesting blog - beautiful photos! Glad I found you!

Oh! I will have to be on the look out for that one. I'm sure that my grandsons would love it. I tried photographing snowflakes last week. I was not very successful, but even with my limited success, I was spellbound. Have you seen any of the photographs that fellow bloggers have taken of snowflakes? Some are truly amazing.