Did you know in 1939 the great Thanksgiving Day calendar controversy began? Beginning in 1863, Thanksgiving was celebrated on the last Thursday of November. Until 1939 that is. 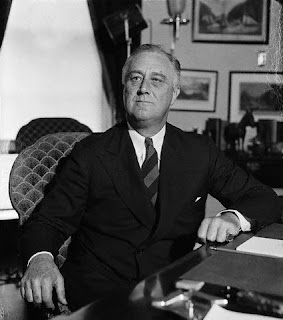 Under pressure to boost spending during the Great Depression, President Franklin Delano Roosevelt moved the holiday up a week in order to kick off the holiday shopping season early. Not only did FDR catch flack from everyone from calendar makers to schools with scheduled football games, some states even rebelled against the change and celebrated on the original day. FDR held the change for two more years, but public outcry was so strong, Congress passed a law on December 26, 1941 to make Thanksgiving the fourth Thursday of November permanently.
Happy Thanksgiving everyone!
Don't forget to count your blessings!
Posted by Carol at 12:01 AM

I didn't know that, Happy Thanksgiving to you to Day.
Patsy

I was singing this first song on your playlist all morning yesterday. I even looked it up on YouTube so I could hear it.
Happy (Belated) Thanksgiving!

I didn't know that. Well I am thankful that it stayed the 4th Thursday of November:)

I heard that this year on a Thanksgiving special. I love trivia! I also love history. So, it's a two for one.
denise

So interesting! Thanks for this info:) Something else that caught my attention was that they passed new law on Dec. 26th- now we're lucky if Congress works any days in in Dec. with their long holiday breaks- for sure they wouldn't be back the day after Christmas:)