Here's the latest news on Ethan. He was moved into the well baby nursery on Friday because so many babies were admitted to the NICU. He is technically still in the NICU because his breathing is being monitored. Today he will be given a breathing test while sitting in his car seat. He sometimes holds his breath, but then corrects it himself. Tonight he'll be monitored for sleep apnea. If the test shows a problem he will be on a sleep monitor at home. We're hoping he'll be going home on Monday. 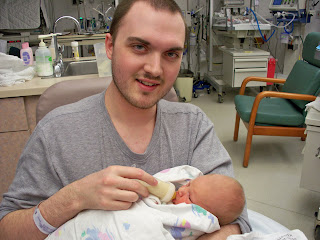 Here's Bobby feeding Ethan on Friday. He's eating very well. Mostly he's being fed from the bottle. However, Kari is doing a great job pumping as well as breast feeding. 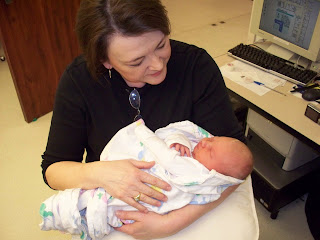 I was so excited to get to hold him for a few minutes on Saturday night. He slept the whole time we were visiting. 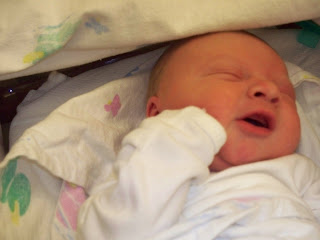 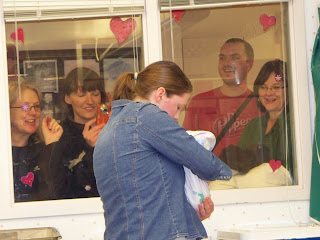 There was quite an audience at the window. Carol, Kari's Mom, her sister, Kim, Bobby, & my sister, Mary.
Bob has been sick with some kind of bug that's been going around so he hasn't been able to go to the hospital.
Thank you again for your concern & continued prayers for Ethan.

Congrats on the precious bundle of joy.i will pray also for his total
health...Ann

OM Gosh Carol,He is so precious,can't you just squeeze him to pieces. Wish I could hold him, I love to smell a new baby. I'm so jealous.

I pray that his breathing gets better soon. He is really a beautiful baby. He reminds me of my own with the blond peach fuzz.... I love it!!!! That picture of everyone looking in the window is so cute!

the voice of melody said...

What a sweet blessing from God! I hope he improves with each passing day. :)

Thank Heavens for those monitors! You all enjoy him..he's so precious.

Sooo precious! I'm glad he's doing better. All of you have been in my thoughts and prayers.

He is just beautiful and it's plain to see that he is bringing joy to a lot of faces!

Thanks so much for your updates...
we are all praying for that precious bundle of joy! ;-)Bo

Carol, that picture of you holding him is just SO precious! He's such a beautiful baby! I'm praying for him. laurie

Such a handsome boy! His color does look better than before. I'll be continuing to pray for his health. We'll be so happy for you when you get to take him home!:)

Carol, That is great news, still keeping Ethan in our prayer. He is so cute.

Thank you for the update on your precious little guy. He will be in my prayers for continued healing.

Oh, what a sweetie. I know you are so anxious to get him home. Then the snuggling begins in earnest.

Congratulations to my cousin and his wife, and to Uncle Bob and Aunt Carol! I've already said a prayer for Ethan's health :)

Ethan is so handsome! Glad to hear that he is well enough to go home.

He's adorable. I sure hope he got to come home yesterday.
Ginger

What sweet pictures. Tell Kari we are excitedly waiting for her to update her blog with lots of wonderful pictures! :)