There's another Pioneer Woman
who resides in Oklahoma. 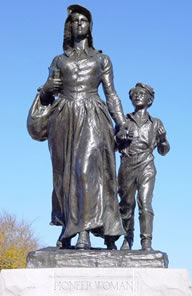 The vision of a statue honoring the pioneer women of this country belonged to E.W. Marland, Ponca City resident, oilman, philanthropist, U.S. Congressman, and 10th governor of the state of Oklahoma. In 1926, Marland invited 17 leading sculptors to submit designs in the form of small models. Four months later, the models were exhibited across the nation and 750,000 persons cast votes for their preference. Bryant Baker’s vision of the pioneer woman was the clear winner. Located across the street from the museum, the Pioneer Woman is a heroic bronze statue of a young, sun bonneted pioneer mother, leading her son by the hand, striding confidently, head held high—a woman of sturdy beauty and dignity, whose eyes are fixed on the far southwestern horizon.
Unveiling ceremonies were held on April 22, 1930, with a dedication service described by national writers as the most stirring outdoor event in the history of Oklahoma.The statue, dedicated to all pioneer women of the United States, carries the following inscription: “In appreciation of the heroic character of the women who braved the dangers and endured the hardships incident to daily life of the pioneer and homesteader in this country."
I haven't been to Ponca City in years.
This would be a great day trip adventure.
Posted by Carol at 9:14 AM

What a beautiful vision of a pioneer woman! I love the little boy. A great symbol of strength and courage. Thanks for sharing it with us!
Hope you're having a wonderful day :)

She is beautiful! I think I'll make a special trip to visit her and the museum. So many interesting and lovely places to visit in our beautiful state! Thank you!

We have so many pioneer statue's here in Utah and they are so inspiring! We are the pioneers of today and we are strong women too, I am thankful for their great example, hopefully the future generation will be proud of me too. Come say hi :D

What would they think of us today?
Patsy

that is a truly beautiful statue, and without here, the other PW would probably not be who she is.


and Ponca is very nice town for a day trip. I think they have an iris festival about this time of year.
We drive up every Dec. for their light show in the park.

A great snippet of history---the statue is perfection!

Awesome bit of history! There were some strong women back then for sure.

I haven't been there but that statue is beautiful! It is a wonderful symbol of a strong woman. Hope you had a great day.♥

One of my best friends is from Ponca City. When I first asked her if she knew about PW she thought I was talking about the original Pioneer Woman. :)

I haven't been to Ponca City in awhile either but if you do go and you like Mexican food, try the restaurant at the airport. It's fantastic!