My hubby & some of his buddies are
traveling to Turkey today.
No, no, not the country Turkey!
Turkey, Texas!
Why are they going there you ask?
To attend the Bob Wills Reunion which is held
the last weekend in April.
Who the heck is Bob Wills? Patience my friends!
I'll tell you that in a moment.
He's been attending this event for several years
& always enjoys the music, food,
& fellowship with the guys. 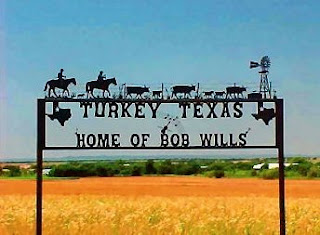 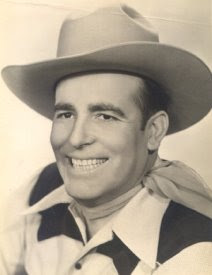 The King of Western Swing
Here's a little bit of info on Bob . . .

Turkey is best known as the home of Bob Wills, the King of Western Swing. Wills was a barber in Turkey during the 1920's. In his biography “Hubbin’ It”, Wills said that the lotions and soft-work of barbering kept his fingers pliable for playing the fiddle. It was a trade that many musicians shared, since the day work of barbering never interfered with dances and holiday celebrations. Wills formed the Texas Playboys band and their music introduced a new offshoot of county-western music known as “Western Swing.”
His music continues to influence music today. Bob Wills has been elected into the Country Music Hall of Fame and the Rock and Roll Hall of Fame. Go here http://www.texasplayboys.net/ for more info on Bob Wills.

Thanks for sharing the history. I didn't know anything of this.

I can't imagine how hyper he is right now! haha. I'm sure they'll all have a great time!

I've never heard of Bob Wills or Turkey, Texas! Those guys are going to have a great time. (And now, you are owed a "Girl's trip", right). laurie

I bet that will be a fun trip!

Carol....Glad Roy didn't know about this weekend or we would probably be on our way there also.

Have a good trip, will be anxious to hear about it.