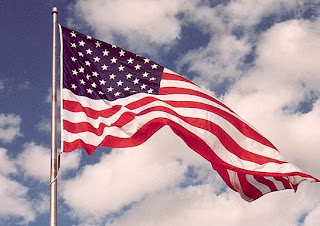 The Pledge of Allegiance
I Pledge Allegiance to the flag of the United States of America and to the Republic for which it stands, one Nation under God, indivisible, with liberty and justice for all.
Posted by Carol at 12:01 AM

It is a beauty.

I am so glad it's flag day!!
We put out our flag every day, and take it in every night. It has been raining the past few day and so we haven't been able to do that. Today is going to be sunny, and so our flag will go out!!
Yea for the U.S.A.!!!!

Love that flag and all it stands for! Happy Flag Day and thanks so much for the birthday greetings!

My flag is flying high.♥

And many thanks to our service men who are protecting our freedom. Saw a piece on dateline last night. Richard Engle was at the front lines of battle and let me tell you it was very intense. Sometimes I forget they are still fighting and not just protroling.

And what a grand old Flag it is.
Patsy

Long may she wave!

Thank you for this wonderful reminder. I had forgotten that today was Flag Day!

Hi Carol, I was sorry that we had rain all day on the 14th, so couldn't put the flag out. But thanks for your post marking the day for us!!:)